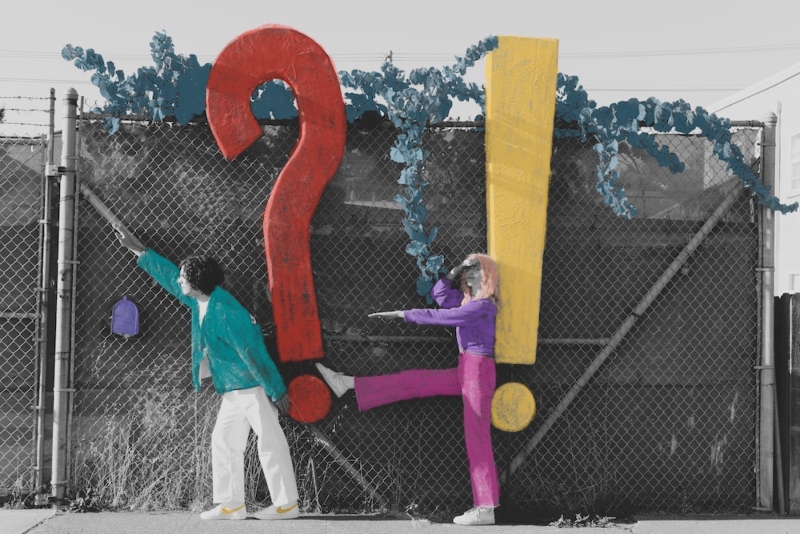 abracadabra dropped a brand new track at the zoo taken from their upcoming album SHAPES & COLORS, out  20th of January via  MELODIC. In the heart of Oakland’s industrial Jingletown above a former auto-repair shop in what was once a mechanics’ break room where poker rounds ensued, Hannah Skelton (Vocals, Synthesizers) and Chris Niles, (Bass, Synthesizers) constructed the angular 80s-tinged anthems (think John Hughes montages to Talking Heads) of their new album, to positively offset the pandemic’s amplification of dysfunctional society. “It reflects our current reality: a huge mess that is systematically broken but isn’t entirely lost,” Hannah tells. “We’re inviting listeners to conjure up every drop of hope and willpower left inside them, pour that into the giant vat of anger and frustration bubbling inside us all, and with this potion collectively enact the necessary change to bring love and light into this dark space.”

When Covid forced Hannah from her salon in San Francisco to become a backyard mobile hairdresser, what she saw inspired them both and the lyrical foundations for their new record. “I’d drive to mansions and people would complain about how hard the pandemic had been next to their swimming pool and tennis courts.” First meeting after the album’s co-producer Jason Kick (Mild High Club, Sonny and the Sunsets) recruited the pair for a Halloween band covering Eurythmics’ art-rock debut ‘In The Garden,’ the pair hit it off and shapes & colours is a product of the years that followed. It combines Chris’ own rhythmic demos following years on the road touring and opening for Amon Tobin, Matthew Dear and Generationals in Maus Haus with Hannah’s lyrical musings honed from project Cassiopeia, so even when topics are as heavy as the beats, they’re met with luminously positive arrangements of hope and warmth.

The by-product of a psychedelic New Year’s Eve escaping a monotonous 2020 reality, the title track itself captures fireworks over East Oakland as viewed from the pair’s couch whilst listening to Mort Garson’s Plantasia for 6 hours straight. The daydream collage of ‘inyo county’ is “a little souvenir taking me back into the bottled-up essence of a slow lazy morning, waking up in bed far from home,” Hannah tells recalling those enforced stay-at-home days. “It fell out of me because I was craving that blissful flavour.” Meanwhile ‘the dawn of the age of aquarius’s new parallel reality evolved from a happy accident when their demos had reset to a drone which Jason reworked into a Laurie Anderson-esque breathy vocoder effect. Even bloops and beeps from a forgotten recording session at the Vintage Synthesizer Museum in Emeryville can be heard, where the pair used Mini Moog, Fairlight EMI and ARP 2600 to arrange their sound into shapes whilst distortion and dirt from mixing on 1979 Neve 5313 Console added to the recordings’ colour.

Casting a brighter rainbow still, in all its pastel-hued glory, Hannah also illustrated a self-portrait of the band for the album artwork. “It reflects our makeshift recording studio to encapsulate all aspects of that time and space,” she shares of their abode where, over an intense two-week period and fuelled by the aroma of fermenting vino from the winery below, their single chord, bass and drum-heavy, groove-first momentum took them on an unexpected journey whilst the next-door couple would fire pizzas in their yard and a grandfather across the road would sweep the street clean. “We’d drink coffee and start the day, consistently working, without interruption,” Chris tells of finding their flow. “The loft is a cool space with skylights, tall ceilings and no shared walls so we could be as loud as we wanted to be.”

Just as well. Diving into decades of electronica and crunchy sound effects, field recordings and animal sounds, blended with an infectious Latin influence, shapes & colours is bolstered by live percussionists Greg Poneris (drums), K. Dylan Edrich (Vocals, Percussion: congas, bongos, chimes, cowbells and wood blocks, tone drum and tri-tone whistle) and Tom Smith (Guitar, Synthesizers, Vocals). It shimmies with the charismatic energy of ESG, Tom Tom Club, Lizzy Mercier Descloux, and the dub hits of King Tubby, the melodic sensibilities of Prince, Stereolab, and idiosyncratic Deerhoof offering an ornate alternative to traditional guitar pop chord progressions as they layer wrecking ball-sized danceable motifs to rumble the dust off the cars on the street from the nearby concrete factory. “We take some big swings to create interesting moments,” Chris explains. NIMBY crews grab those earplugs now. abracadabra is your new noisy neighbour, and there’s no turning this party down.

10. dawn of the age of aquarius

About Me. I am an admin.